An early adopter shares how he approached his employer about getting paid in virtual currency.

I discovered bitcoin in early 2011. At first it was something that felt like play money and almost surreal. I didn’t fully understand all the details back then, but a decentralized, peer-to-peer digital currency was just too crazy and I became intrigued.

Over the years I started diving deeper and deeper into bitcoin. Along the way, the true power of it really jumped out at me:

I ended up doing some freelance bitcoin development just before I joined Buffer. It’s often a topic that my brother and I can talk about for ages. There’s tons of potential here, and VCs see it too.

Bitcoin is often seen as a speculative investment, like a digital asset. However I’ve often been intrigued to explore using bitcoin more often.

Although I do keep part of bitcoins as an investment, the times that I have used bitcoin to transact online, it’s been an absolute joy. I’ve made many purchases, such as booking hotels in New York (for traveling before the fourth Buffer retreat), buying coffee and even games online.

The list of merchants who accept bitcoin just keep growing, including Microsoft, Dell, and many more. The ecosystem has flourished since 2014, when I realized that I could definitely start spending bitcoin regularly for parts of my life.

I didn’t want to lower my bitcoin assets too much, so I decided to explore the option of getting paid in bitcoin as a way for me use bitcoin as both an asset and a currency.

ONLY 5% OF MY SALARY FOR NOW

Before I started the process with Buffer in getting paid in bitcoin, I took stock and chatted with my girlfriend about what seemed feasible in terms of holding bitcoins as a currency.

Bitcoin is infamous for its volatility, and at this point getting paid fully in bitcoin would not make sense for me. It’s just too risky.

I decided as an experiment to start off with getting only 5% of my salary to be paid in bitcoin, out of a total $96K per year that I’m making. (We have completely transparent salaries at Buffer, you can take a peek at all of them here).

FIRST STEP: GETTING ADVICE FROM THE TEAM

The way we make decisions at Buffer is through an iteration called the advice process. We do this since we don’t have any managers and are a fully self-managing team. So if you’re interested in tackling this in your startup, you might not be able to use that exact path, but I hope it might be a good proxy.

First, I created a document to list all the pros and cons of getting paid in bitcoin and shared this with the team to get their advice. Here was the list:

The consensus among the team was unanimously positive. A few others also expressed interest in trying to get onboard as well.

It definitely helped that most of the team understood bitcoin in some way and many are also fans themselves. I remember during our Thailand retreat in January 2014, when the price of bitcoin was close to its high, having numerous chats with the team about how amazing bitcoin was. Needless to say, my evangelism led to some of the team buying bitcoin right at its top.

It’s become an inside joke among the team that whenever I mention bitcoin, it should come with a disclaimer that it’s not investment advice.

SECOND STEP: GETTING EVERYTHING SET UP TO BE PAID IN BITCOIN

We’re incredibly fortunate to have an amazing payroll and finance company, Foresight, to help us out in this regard. They handle our payments and expenses with such speed and joy.

Randy is our go-to person for all things Buffer at Foresight. I started the conversation with Randy to see how Foresight might feel in exploring how to get paid in bitcoin:

It helped immensely that Randy was open and willing to explore this with us:

The tricky situation was to find a method that worked smoothly for both Foresight and Buffer. Since Foresight is based in the U.S., it opened up few initial options to explore: Coinbase and Circle.

Both sites offer easy setup with U.S. bank accounts, which would allow Foresight to purchase bitcoins and then send that amount to me in South Africa. This essentially placed the responsibility on Foresight to hold and manage bitcoins as an additional currency option.

Randy went ahead and applied at both Coinbase and Circle. However, both took some time to validate their banking details to start purchasing bitcoin. I did some more research in Coinbase and Circle and realized that neither of them might work as smooth as we’d hope for, especially on Foresight’s side:

There are purchasing limits in place. Although the amount that I was hoping to receive as part of my salary would’ve fit within the limits, this might not be a long term solution if more people decide to jump onboard or to increase their payment via bitcoin.

Volatility created some tricky situations. At the time of exploring these options, the bitcoin price dropped by around $30 within a few hours. Services like Circle and Coinbase offer to lock in the amounts, but with conditions. So there were possibilities that I would get a different amount of bitcoin and/or Foresight would have to keep some bitcoins left over. We both decided that this didn’t feel quite right for Foresight. Using bitcoin should be smooth for both parties.

I then did some more research and discovered a service called BitWage. They are a bitcoin company geared towards payroll services. They understood the challenges involved and had some really interesting products already. One such service is payroll for the individual. Here’s how it works: 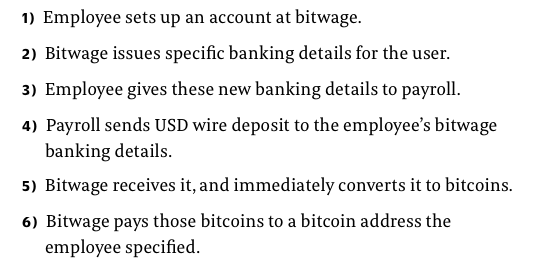 In a way, Bitwage acts as an intermediary between me and Foresight. Foresight then has to make no changes except to add an additional wire transfer.

On my side, I can then choose how to receive my bitcoins. I set up an account soon after finding bitwage.

We tested things out with a small transfer. It worked incredibly smooth! Randy and I were both extremely happy with this setup.

HERE’S HOW YOU COULD DO IT TOO

Bitwage, however, especially the payroll for individuals, allows you to setup these separate banking details without necessarily having to convince your employer or payroll company. It’s a very risk-free and easy setup for all parties involved.

Since I now receive money via an international transfer and bitcoin, it prompts the question: how do you handle taxes?

Bitcoin is still very young in its development and regulation is still forming. It’s best to ask a tax consultant and also keep on the lookout for statements from your local treasuries/banks. South Africa, for example, where I live, has issued a statement that they won’t regulate cryptocurrencies for now.

Although the current amount I receive is not a lot, if you were to consider receiving all your money in bitcoin, then exploring tax might be a good course of action. It remains to be seen how many countries will regulate it.

I’ve received two payments already, and it’s been incredible to see this in action. I use bitx as one of my main bitcoin wallets. Here’s the first transaction that came in: 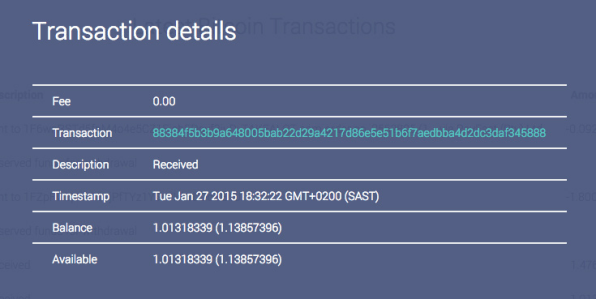 And with the amazing technology behind bitcoin, you can see the detail of this very transaction on the blockchain:

Perhaps someday in the future, bitcoin might be the only currency I use. Exciting times ahead!

This article originally appeared on Buffer and is reprinted with permission.