Bitwage provides a domestic bank account for each of the 30+ supported currencies. Employers remit payment as if they were sending a domestic wire transfer. Once the clients have paid, Bitwage converts the wage into bitcoin and either forwards it to the user, or sells them for Brazilian real before crediting the recipient's local bank account.

Since launching early in 2015, the service has been used to transferred $5m in wage payments all over the world, and is now insured “for errors & omissions and cyberliabilities,” by a top-rated US insurance carrier.

The company provides services in the US, Europe and Asia, and branched out into South America, earlier this year, launching in Mexico. Employees have received payments from Upwork, Freelancer, Staff, AirBnB, and Uber, as well as large tech industry companies like FaceBook, Google, and Yahoo.

“We help workers receive their wages in flexible distributions including Digital and Local Currencies. We aim to reduce payroll costs, increase transfer speeds, and make the payroll process trackable for employers and workers.” -- - Bitwage

Brazil seems like a wise choice for expansion. The IMF World Economic Outlook ranked Brazil as the world's eighth largest economy in 2016, making it the largest economy in Latin America. The country’s population, 209 million based on the latest United Nations estimates, is 2.83% of the total world population.

“By leveraging the blockchain, we have typically seen transfer speeds into local brazilian bank accounts next day with workers receiving up to 10% more money compared to exchange rates on bank wires during our beta in brazil over the last 5 months.” -- - Bitwage

An independent report by McKinsey states that digital marketplaces and online platforms such as Monster. com and LinkedIn have experienced “dramatic” growth and adoption in many countries, including Brazil.

While millions are unemployed worldwide, these platforms have helped workers and their respective economies, the firm explained, but “they are still evolving in terms of capabilities and potential.”

“The rapidly growing number of digital marketplaces for services, such as Uber and Upwork. Even if these platforms touch only a fraction of the global workforce, they can generate significant benefits for economies and for individuals.” -- - McKinsey

Informal employment is often referred to as the ‘shadow economy,’ or ‘System D,’ and includes work for enterprises that operate outside the view of regulators or tax authorities, as well as ‘under the table’ self-employment in any kind of small-scale businesses run by individuals or family members.

McKinsey defines ‘Online talent platforms’ as websites such as Monster.com and LinkedIn, as well as digital marketplaces for services such as Uber and Upwork. People in Brazil use these talent platforms to search for jobs more than any other country, including India, the UK and the United States.

According to McKinsey, 56 percent of respondents to a survey admit that online platforms have helped them find better jobs, a number far ahead of people in other countries who have such jobs that Bitwage is useful for. 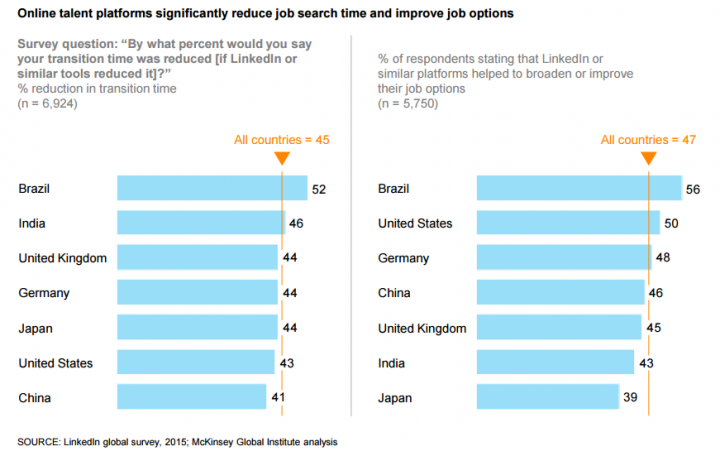 To help their marketing effort, Bitwage has announced a new referral program to attract Brazilian workers, along with the payroll and invoicing launch.

“For every brazilian contractor or freelancer referred, the referee will receive 0.50% of all the wage payments that come in through our invoicing system for 6 months,” states the company. “There will be a max payout of 1000 USD a month per referee.”

Earlier in July, the MEDICI Top 21 Blockchain Awards by Let's Talk Payments (LTP) named Bitwage as one of the top 7 Blockchain Startups in the Americas. Winners were chosen from over 50 bitcoin and blockchain startups worldwide. With 2,303 enterprise subscribers, MEDICI profiles 4,645 FinTech companies and has $47.4 Billion disclosed funding, according to its website.