Bitwage, a bitcoin payroll and international wage payment service provider, recently announced the release of Bitwage Payroll service for Individuals (BPI) in Europe. Founded in 2013, by CEO John Lindsay and President Jonathan Chester, Bitwage was originally created as a bitcoin payroll service for employers. In November 2014, the company expanded its service to employees and freelancers, without requiring their employers or clients to sign up.

Founded in 2013, by CEO John Lindsay and President Jonathan Chester, Bitwage was originally created as a bitcoin payroll service for employers. In November 2014, the company expanded its service to employees and freelancers, without requiring their employers or clients to sign up.

BPI has been available in the United States since January 2015, allowing employees, freelancers, and contractors to receive wages any U.S. employer internationally, in their local currency. 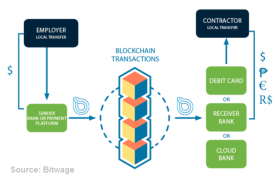 Bitwage users will be given a U.S. or European bank account number, depending on their client's or employer's location. Wages can be fully or partially deposited into this bank account. The company will then send payments the next day, according to the user's chosen method of distribution.
BPI is compatible with existing payroll systems like Intuit, ADP, Bill.com, Gusto, TriNet and freelance marketplaces like Upwork. Initially, Bitwage will not charge a fee for the BPI, and Automatic Zero-Click Payrolls, but charges may apply for features such as non-automatic payrolls with wire transfers and 1099 Filings.

“Our mission is to bring the value of real-time digital wage payments global. We started this by allowing anyone to receive their wages in Bitcoin without their employer or clients needing to sign up with us. Over time, we have managed to create an international payroll system that is faster and cheaper than the banks, paying employees in Europe, Philippines, Mexico, Brazil, Argentina and more.” John Lindsay, Bitwage CEO

The company currently offers an assortment of distribution types. Users can receive bitcoin deposited into one or more bitcoin addresses, or direct integration to mobile bitcoin wallet. Bank to bank transfer is available to the Philippine, Brazilian, U.S., and European banks. Alternatively, wages can be uploaded into an Uphold savings account or a Xapo debit card. Uphold supports 31 national currencies, while Xapo debit cards work in 130 countries. Separate accounts are required at the two companies, subject to their terms of service.

While bitcoin is the only cryptocurrency distribution option offered, other output options include gold, silver, platinum, and palladium, as well as more than 20 national currencies.

For added security, Bitwage does not store an inventory of bitcoins, or hold any customer funds. Wages are sent into their Cloud Savings account solution, powered by Uphold. The company also partnered with a best-in-class vaulting service in February, that is insured by Lloyd’s of London, effectively providing insurance for all wages.

The addition of the European market far more than doubles Bitwage’s potential customer base. In Bitcoin adoption, population, self-employment, and size of their fiscal markets, Europe is a much larger market than the United States.

According to Kalin Anev Janse, Secretary General of the European Stability Mechanism, the euro area’s fiscal balances are healthier than the U.S., and its labor markets are getting stronger. While the employment rate in the U.S. has fallen since 2000, it has increased in the euro area.

"The EU remains one of the largest economies in the world.[...] It is the world’s largest trader of manufactured goods and services, whose large internal market accommodates 65% of its overall trade, given low labor costs and a well-educated common market workforce. It is also first in both inbound and outbound international investments. It is a top trading partner for 80 countries compared to 20 plus for the U.S." Kalin Anev Janse, European Stability Mechanism Secretary General

In addition, the EU has a higher self-employment rate than the US, 16 percent versus the 6.6 percent, according to578959_EN.pdf) the European Parliament.

“In 2015, the European Union had a higher GDP than the United States. With our launch in the European Union, contractors and freelancers all over the world will have a much easier way to receive their wages abroad from one of the largest economic zones in the world. All without the friction involved in trying to convince clients to change their payment solutions.” -- - Jonathan Chester, Bitwage Founder, and President

In a Global Payroll Survey 2014 report, Ernst & Young highlighted the challenges multinational companies with employees all over the globe face in administering payroll.

They found that the number of organizations looking to expand into global markets has increased from 35 percent to 52 percent, since their first survey in 2012. “Expansion in unfamiliar territories creates payroll risk in the areas of compliance, quality and data privacy.”

“Payroll executives say they aspire to find a single provider able to service them in every locale, but it is difficult to find an operator who is able to fulfill all of their criteria: cost efficiency, quality execution, payroll delivery in all locations, flexibility, scalability and access to data.” -- - Ernst & Young

Bitwage is trying to address all of those criteria; advertising low cost, fast payments, and transparency.

Employers do not have to change their processes, or sign up with Bitwage. “They can simply pay it using Wire or ACH as they've been done their entire life,” stated a representative from Cheesecake Labs, who left a review as a customer of Bitwage. “The process is also really quick since it takes about just 2 business days to make the payment appear in my account,” the poster added. “It takes about 15 business days to complete an international wire transfer to Brazil.”

According to the World Bank, the average global cost of sending remittances was 7.37 percent as of December 2015. The cost of sending money through commercial banks remains the most expensive, at 11.12 percent ,while sending through a post office is the least expensive at 5.88 percent. “We bring this down to under 1% on average,” states the bitwage site.

Bitwage revealed that some of the world’s best known companies have emoloyees that use the service, including Google, Airbnb, Facebook, the World Health Organization, and Uber.