Bitcoin. Lots of people are talking about, but very few own it.

So how would you feel about getting paid in the high profile cryptocurrency?

From early next year, staff at Japanese internet firm GMO Group will be among the latest to find out how that feels.

More than 4,000 employees are being given the option to receive a portion of their salary in Bitcoin.

Critics say it is a marketing stunt, announced at a time when global interest in the financial technology has never been higher.

It also carries risks: the volatile currency slumped last week but has since rebounded by more than 50%.

But what will it really mean for employer and employee?

How does it work?

Bitcoin salaries are usually paid according to the digital currency's value at an agreed date and time.

To keep the numbers simple, if the Bitcoin price was $10,000 and an employee opted to have $1,000 in the digital currency, they would receive 0.1 Bitcoin.

Employees who choose to sell right away would receive the same in cash as they would have been paid (so long as they had arranged for the sale to happen in advance).

But holding onto the cryptocurrency, be it for a day, a week or a year, would see its value go up or go down. That $1,000 may end up being worth $5,000. Or potentially next to nothing.

And so some argue that paying wages in Bitcoin effectively encourages people to gamble.

"If an employee is receiving their salary in Bitcoin, they might as well be receiving lottery tickets", said Massimo Massa, professor of finance at INSEAD.

"They are just participating in a game."

Staff must be made aware that "there's no guarantee that its price will rise and there's no intrinsic value because there's nothing to back it up", he said, adding such schemes could never be compulsory.

So are employees keen?

Despite repeated warnings from renowned economists and analysts that a Bitcoin crash is looming, it seems more of us are willing to take a punt.

Bitwage, a platform set up to convert salaries into cryptocurrency, gained thousands of new users this year as people got swept up in some rapid price rises.

"These days a lot of people are looking to get part, and sometimes all of their salary paid in Bitcoin", said Bitwage founder Jonathan Chester.

The company has this year processed $30m in wages for 20,000 users in the US, Europe, Latin America and Asia including staff from Google, Facebook, GE, Philips, the United Nations and the US Navy. Many of these workers had signed up for the service on their own.

Mr Chester said he converts 15% of his own monthly salary and believes it is "a way of accumulating Bitcoin or cryptocurrencies without worrying about whether you're buying at the right time".

That is because people can theoretically reduce the risks of volatility because they "only buy little bits over time".

And what about tax?

It is a tricky one to generalise, and it seems inevitable that as the industry develops, so too will the tax rules.

Wherever they are in the world, employees will usually be liable for income tax due on their Bitcoin wages, calculated on its value at the time the salary is paid.

But just like with stock options, employees may need to pay capital gains tax if their Bitcoin has risen in value, depending on the tax jurisdiction.

What is in it for employers?

Some companies working in the cryptocurrency industry have been offering Bitcoin salaries for years.

After all, if you got in early and bought when the price was much lower, then it could be a smart move to use it now to pay wages.

But for others it is all about business strategy.

Japan's GMO, for example, says it wants to get staff thinking about cryptocurrencies.

It has recently expanded into cryptocurrency trading and crypto mining.

And so it hopes that if at least some employees have direct personal experience of Bitcoin, it will help with "nurturing and developing cryptocurrency literacy".

And that, it says is "vital to the growth and expansion of our cryptocurrency business". 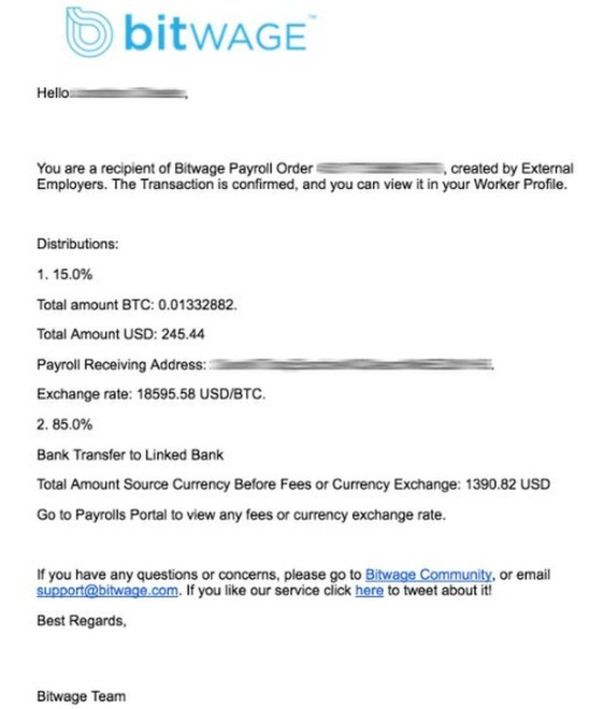 Is Bitcoin the only option?

The digital payment industry is expanding, with new digital currencies emerging all the time.

At the Singapore based blockchain company TenX, staff usually have their base salary paid into their bank accounts, but their monthly bonus is paid in Pay tokens, the firm's own digital currency.

The tokens, which can be traded on digital exchanges, were issued in an initial coin offering in June, allowing the company to raise $80m.

TenX co-founder and president, Julian Hosp, said it did not make sense to buy Bitcoin to pay bonuses when the company already had its own currency.

Paying bonuses in tokens can incentivises staff as Pay's value should rise in line with the company's success, Mr Hosp added.

TenX community manager, Mike Ferrer, has gone further and opted to receive part of his base salary in Pay, on top of his monthly bonus.

The 32-year-old has been investing in cryptocurrencies for some time, and accepts that there are huge risks, but says he only invests what he can afford.

"I visualise myself throwing in a pile of money and watching it burn in front of me, and if I can't feel comfortable with that then I know I've over invested", Mr Ferrer said.